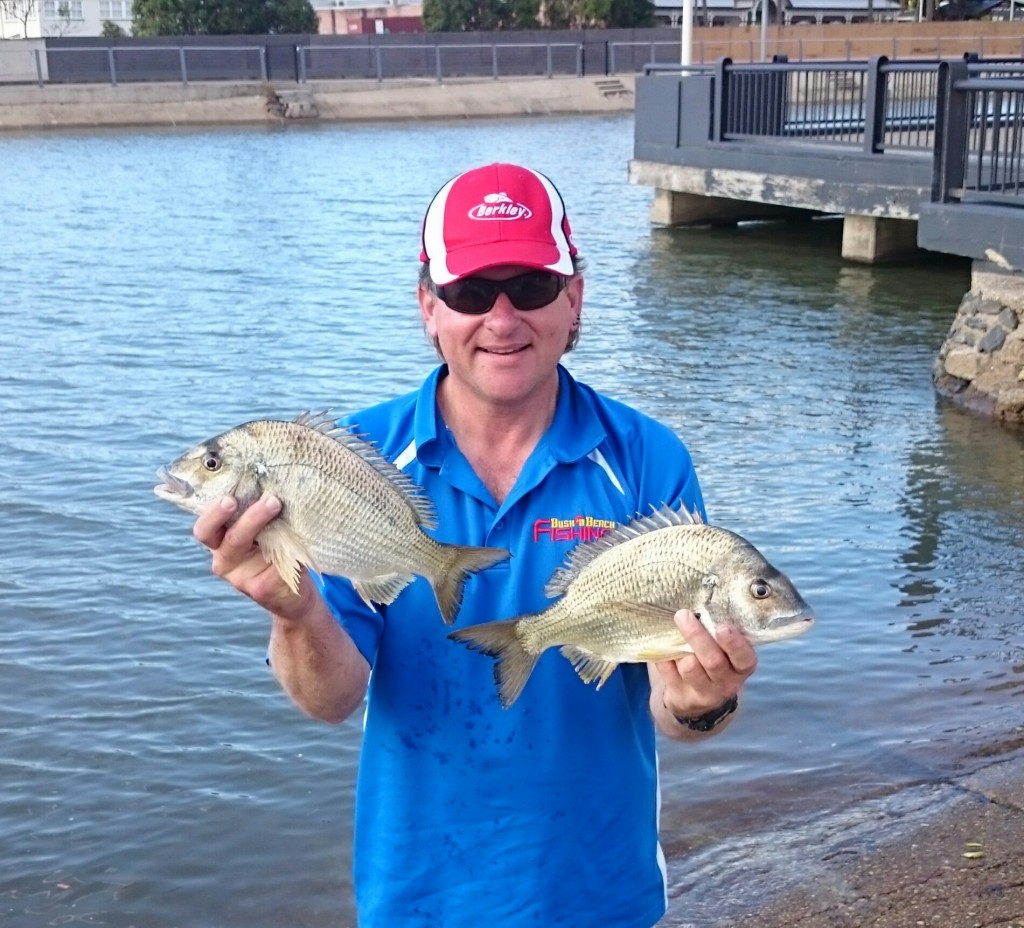 It was almost 12 years ago that we got into the bream luring caper, and whilst its not clear how it happened, it came to be that of all the fishing we do, the QLD Open was the only event we now fish together.

It is such an enjoyable event and one which we love, it has become quite a tradition. Having had the privilege of lifting the trophy 3 times also helps keep us coming back!!!

The event has changed a bit over the years, but ultimately it is a Moreton Bay comp run over 3 days and is a true test of teams ability to improve each day and maintain their catch rates.

All of our wins came from first day deficits and big comebacks – quite often we found ourselves 1kg or more behind, and last year we came from last.

Well, that all changed this year! 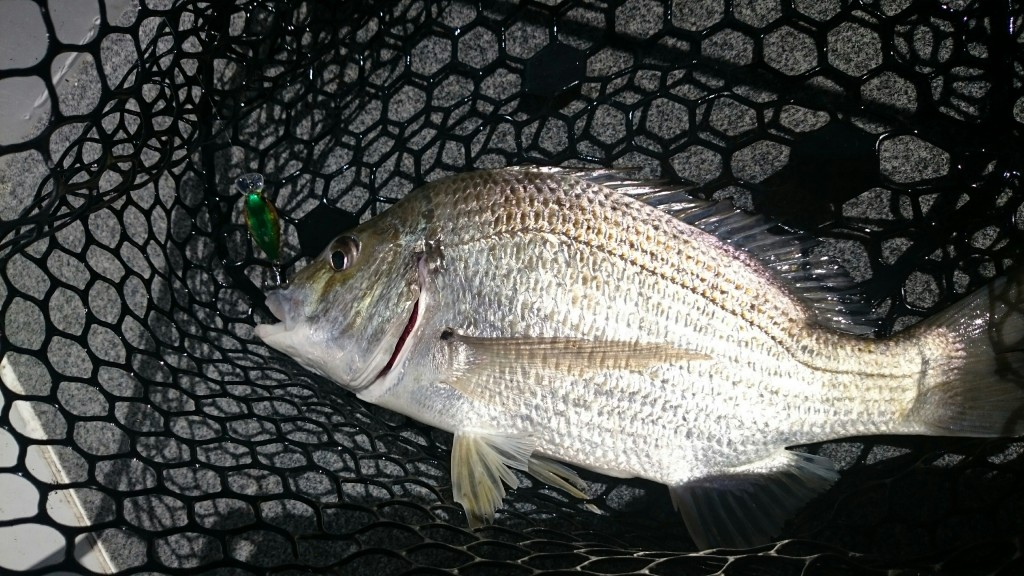 The tides for the event were good with a low in the early to mid part of the session, which is what we like, but the size of the tides were not massive, and some of our high tide spots were probably going to be a bit dicey.

We lover fishing surface in the Open, and for surface, the warmer the water, the better you go. We normally like 20 degrees or warmer.

Coming out of Winter, the temp was not quite where we liked, with 18 degrees being as hot as it got. The weather forecast also was sensational, with light breezes forecast for the 3 days.

The first day started with a surface pattern, which got plenty of rises, but with the water a little cool, the fish did not commit as they should to the Cultiva Zip N Ziggys and Berkley 3B Scum dogs. However, we were still able to compile a bag in just over 2 hours, with a couple of fish above 30cm fork length in the bag.

As the tide rose, we swapped out to shallow cranks in the Berkley #B fat dog range, and cranked a variety of banks following the tide up. This can be an electric style of fishing, if you can get the timing and depth right and target concentrated fish in feeding mode.

Whilst it took a little time for the fish to move up with the tide, the last hour and a half was champagne with a fish every second cast, and the quality improving as the tide rose. We consistently upgraded until at the end of the session, we had a bag of bream between 31 and 35 cm to the fork, which is pretty much as good as it gets(without nailing a real monster).

It was a little hard to estimated the weights, and we called it for 3.5kg in the car to the weigh in at the Brisbane Boat Show. When the fish went on the scales, we were stoked to get over 4kg, with a bag of 4.02kg, which had us sitting in 1st!!!

It was an awesome feeling, but also unusual, as ti was the first time we went into day 2 with a lead!!! 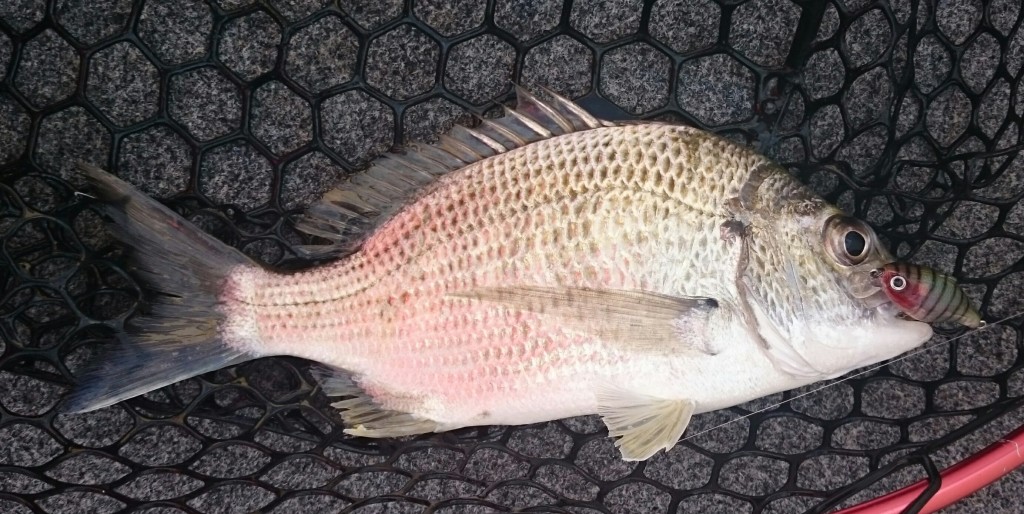 Whilst excited on the way home, we were a little worried by the timing of our fish – given the tide would be an hour later the following day, it was going to be touch and go as to whether we would get those late fish.

Anyways, on day 2, we stuck to the plan, except we decided after the early surface bite, we would rotate to some of our other spots in order to find new fish. The morning was quite frustrating, with a similar number of rises to the day before, but the conversion tanked, and after an hour or so, we left with only 2 small fish in the well. We moved to Macleay Island, which has been very good to us over the years, and slowly put a bag together in a range of spots, but came across no big schools. With a small bag, we headed back to the bank from the day before to try and upgrade in the last hour, which we did, but nowhere near to the extent of the day before. Back at the weigh in, it was clear we were in a bit of strike, as all teams seemed to hit fish late – they just had access to their spots a little earlier in the tide. With a small bag of just over 2kg, we slid to 3rd, but still had a shot with a big result on day 3. 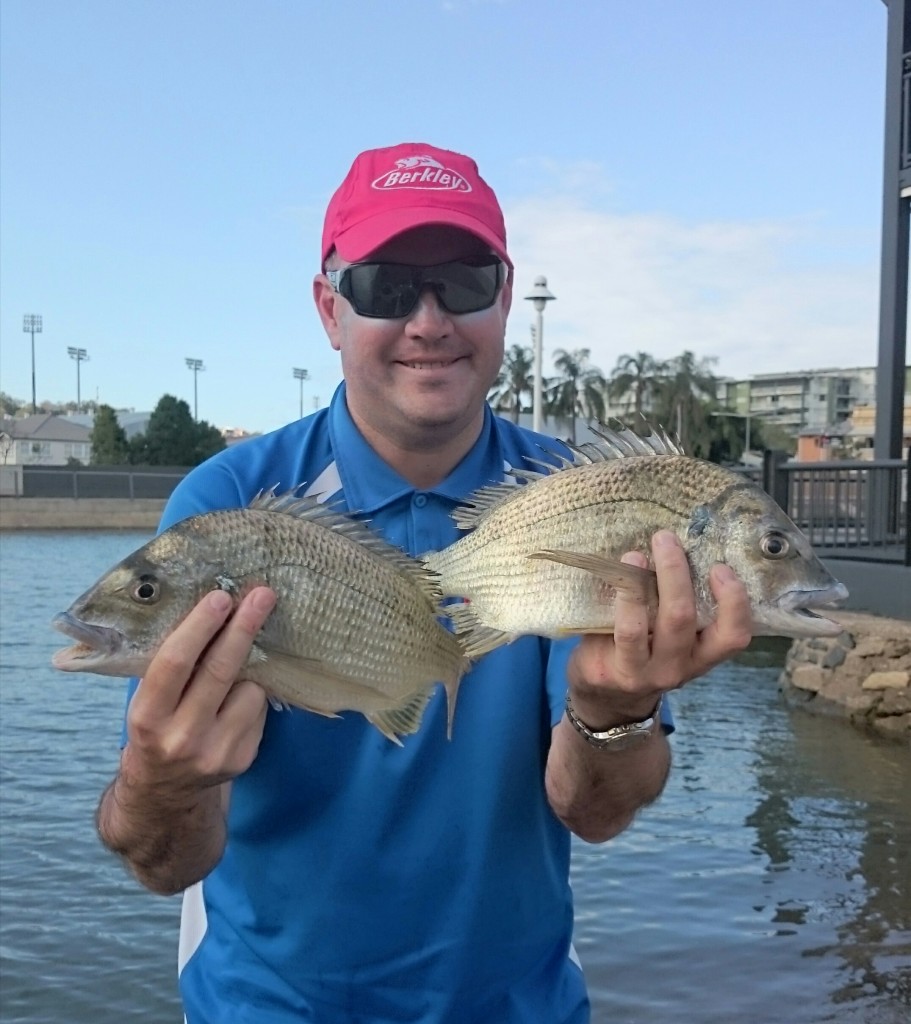 We changed our plan on day 3, and decided to “run and gun” to a milk run of spots that had all produced over the years. The idea is simple – keep moving until you fins them, and don’t burn too much time in one spot. We did start on our favourite bank again splashing surface lures, and came up with 2 fish, but left after 40 minutes. The rest of the day was very enjoyable, as we ended up finding plenty of fish(in fact we probably caught more than day 1), but we just could not find bigger fish. We hit a couple of hail mary spots on the way back, which yielded a few small upgrades, but as we pulled in, we felt that barring a miracle, we had not done enough.

There was no miracle, and weighing in a slightly larger bag than the day before of 2.28kg was not enough to topple our ongoing competitors from Team Samurai – David McKenzie and Tristan Taylor who went on to record their 4th title, with a clear win averaging not far off 4kg a day, which is a sensational effort. Well done boys, and see you next year!!