Tackling any estuary system with lures and soft plastics for the first time is an exciting prospect. Irrespective of the location, visualising that first hook up never ceases to get the juices flowing.

Arriving at the boat ramp high on expectation, your enthusiasm and emotions soon come crashing down, however, when those first few hours of non-stop casting fail to induce a strike. This wasn’t the start we envisaged! Cursing yourself for leaving the bait pump behind and on the cusp of resorting to a smelly old packet of frozen prawns, you begin to wonder whether these high-tech fancy artificials are just a beat up. Sound familiar? I reckon we’ve all been there at some point. The good news is the mystery surrounding light tackle lure casting, or at least parts of it, can unfold very quickly with a general understanding of some basic concepts. Taking into account that a formula for absolute guaranteed success does not exist, recognising some of the elements that trigger common southern estuary species to feed certainly helps narrow down the key target areas.

Bream are readily available year round in most systems and can usually be coerced into snatching a lure throughout any stage of the tide. During the warmer months, well presented surface lures are highly effective across shallow flats and weed beds. Similarly, lightly weighted worm, shrimp and crawfish pattern soft plastics can be equally successful in skinny water environments. These areas are most productive during the latter stages of a rising tide, particularly when coupled with low light conditions at dawn and dusk, when bream roam the shallows with greater confidence in search of a feed. Overcast skies, combined with some surface chop also provide cover for bream grazing over shallow ground. A stealthy approach is required when stalking fish in the shallows and the best form of attack is to use a tailing breeze to make the longest cast possible. As the tide recedes, work the edge of deeper channels and eddies with small diving bibbed minnows or baitfish profile soft plastics rigged on jig-heads just heavy enough to reach the bottom. During winter, expect bream to be schooled up deep, sometimes over seemingly featureless ground where metal blades often prove effective. These fast sinking lures are ideal for working deeper channels, drop offs or any open space where bream are concentrated deep in the water column. 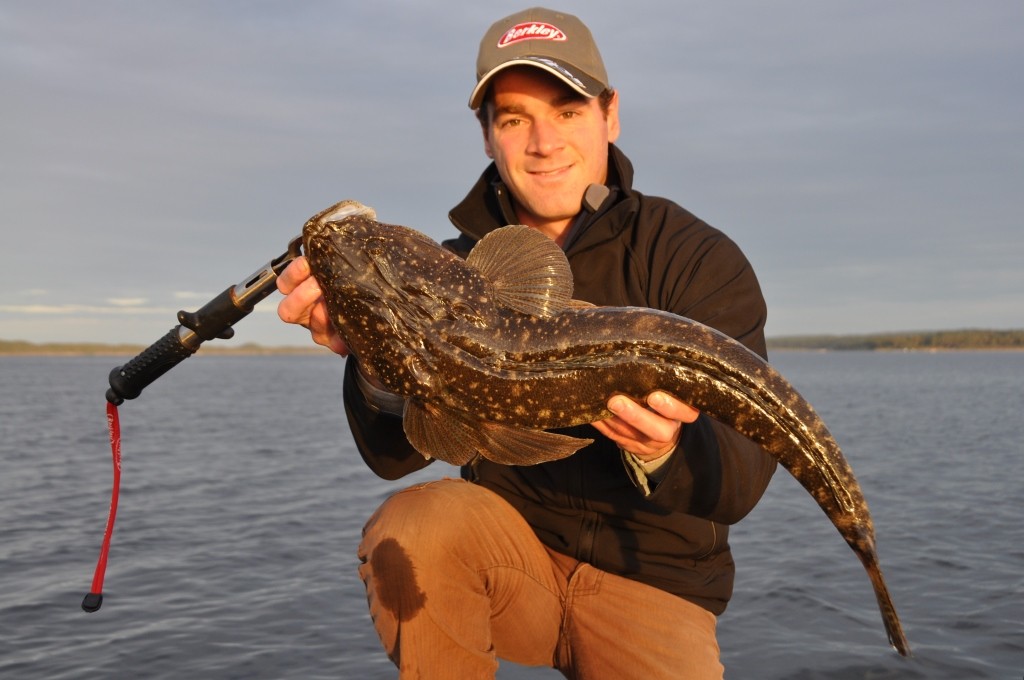 Found in tidal estuaries from Wilsons Promontory through to southern Queensland, dusky flathead tend to be most active, or least more predictable, during an outgoing tide as they lie in ambush along the edge of draining flats. Look for the gutters or deeper channels adjacent to these shallow areas, particularly during the last few hours of the run out. Prime time for flatties in terms of both size and numbers is undoubtedly spring through to late summer. School fish up 45 cm or thereabouts are partial to single tailed grubs and baitfish profile soft plastics, while larger paddle tails and shads more commonly tempt the big bruisers. Taking into account the depth, strength of current and wind speed, soft plastics should be matched to a weighted jig-head that is heavy enough to make regular contact with the bottom. A steady lift and drop style retrieve is the go and whilst flathead will occasionally chase down a moving target, more often than not hits occur during a deliberate pause in the retrieve.

Mulloway have been in far greater numbers throughout southern parts of Australia over the past few years. Many estuary systems have seen an influx of juvenile schoolies, though larger specimens are most certainly available, provided you have the knowledge, skill and patience required to locate them and trigger a response. Mulloway tend to feed in short, sharp bursts as the current slows during a change in tide, especially around the full and new moon phase. Bridges pylons, sweeping bends and deeper holes are good places to start searching. In most instances, they will be shadowing large concentrations of yellow-eye mullet, juvenile salmon, tailor or whitebait. Somewhat surprisingly, tiny metal blades intended for bream bring many of these beasts undone, although larger soft plastics with plenty of tail action are generally a better option when specifically targeting jewfish.

Pinpointing prime fish holding zones is generally a case of trial and error, though the process can be accelerated by seeking out areas that offer structure and tidal flow. Snags, rocky banks, sand or mud flats, weed beds, drop offs, ledges, channels and feeder creek junctions are typical forms of naturally occurring structure. Artificial features such as bridge pylons, retaining walls, channel markers, oyster leases, moored boats, jetties and floating pontoons are also common in urban waterways. Irrespective of whether it’s naturally formed or manmade, most structures encourage some form of weed growth, as well as attracting barnacles, mussels, oysters and the like. All manner of bite sized morsels, such as shrimp, prawns, crabs, yabbies, worms and baitfish, gravitate to these growth covered features, which in turn draw forage species and larger predators. Tidal ebb and flow and the continuous cycle of rising and falling water also has an immeasurable influence on where, when and how fish feed within estuary environments. The latter half of a making tide provides the best opportunity (for both anglers and fish) to prospect areas of shallow flats. A host of species use the increased depth as cover whilst searching for crabs, yabbies, worms and so forth. As the tide turns and water levels gradually recede, fish start to move away from the shallows in favour of deeper haunts. The last few hours of the run out is arguably prime time for larger predators to stage an ambush as nervous bait is flushed off the draining flats and funnelled into the main channels.

Two basic threadline outfits including a lighter combo for bream and a more assertive set up for flathead and mulloway, should cover most southern estuary applications. When selecting a lure or soft plastic for any given species, try to emulate the size and shape of the bait or prey in the immediate area.

A Test of Time

As anglers, we’ll never know exactly what makes our quarry tick in every given situation and perhaps the best advice is to simply put in the hours. Make the most of each and every opportunity and view time on the water as a chance to learn and acquire information, even during seemingly unfavorable conditions. Often this is when we discover most about a particular target species, bite triggers and the diverse nature of southern estuary environments.