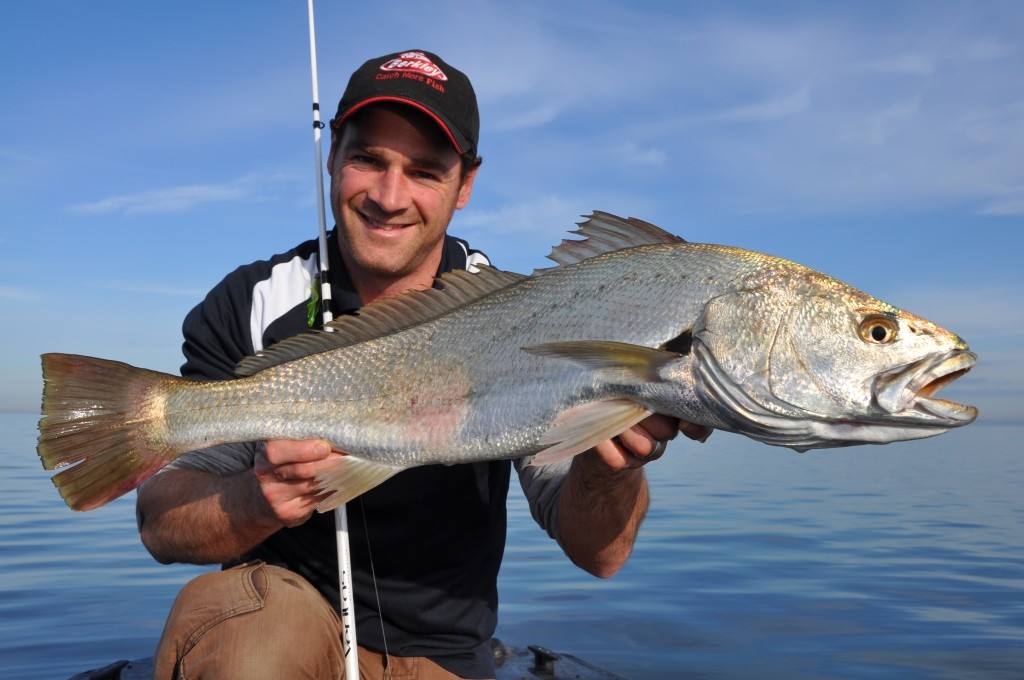 Mulloway (or Jewfish) have been in far greater numbers in southern parts of Australia over the past few years. In fact, since the drought breaking rains back in late 2010, many bay and open estuary environments have seen an influx of juvenile schoolies ranging in size from well under the 60 cm legal limit up to and sometimes beyond the magic metre mark.

Until relatively recent times, my first-hand experience and knowledge of the seemingly elusive mulloway was very much limited to a few chance encounters whilst chasing bream and more stories of the one that got away than I care to remember. The past couple of seasons, however, have proven to be a real eye opener with several sessions producing multiple school sized jewfish. Though I’d fluked a few as by-catch over the years, that first specifically targeted mulloway was a real thrill. Nerves, expectation, frustration and patience (or lack thereof at times) each played a part, but once a fairly modest specimen of just sixty odd centimetres lay cradled in the net beside the boat, feelings of tension and anxiety soon turned to elation and satisfaction. Every trip thereafter, our confidence grew and together with good mate and regular fishing partner, Aaron Hassett, we began to piece together sections of this infinitely complex puzzle. Chasing mulloway soon became an addictive obsession and I found myself thinking about it day and night for months on end – checking tides, weather forecasts, moon phase calendars and more importantly, gaps in my work schedule where I could sneak out on the water.

Incidentally, that first capture was the result of eight successive hours of casting for zilch! And then, as if someone had flicked the proverbial switch, four schoolies hit the net within just half an hour before the bite again shut down. This example illustrates the fact that mulloway tend to feed in short, sharp bursts, usually as the current slows during a change in tide. There have been times when we’ve picked them up sporadically, though more often than not, it’s a case of three or four hits (or maybe just one) in quick succession and that is all! In terms of key target areas, bridge pylons, sweeping bends, break walls, ledges and deeper holes are good places to start searching within any given bay or estuary environment. In most instances, however, mulloway are found shadowing larger concentrations bait, be it yellow-eye mullet, juvenile salmon or whitebait. Interestingly, they also tend to lurk around the outskirts of schooling bream, especially during the cooler months. 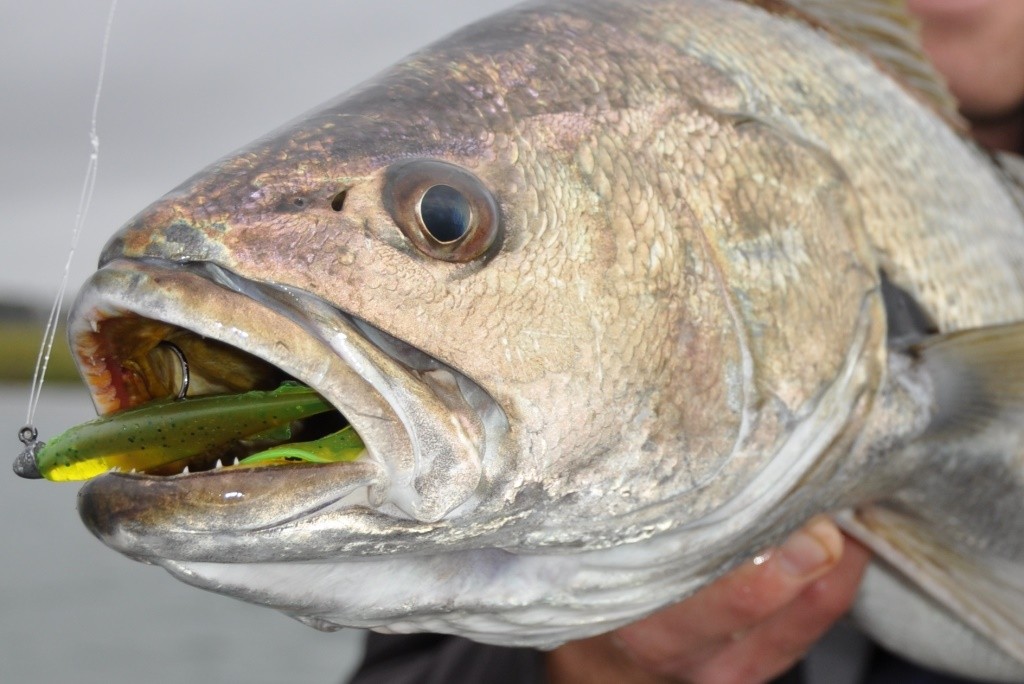 As a light tackle lure enthusiast, my preference is to actively pursue these fish with soft plastics. In particular, the Berkley Gulp! Turtle Back Worm, and more recently both the Gulp! and Powerbait version of the 4” Nemesis range has accounted for much of our success. Rigged on a 1/8 to 1/4 oz. Nitro Stealth jig-head, each is a winning combination. The unique Nemesis shape comprises a shad style body with a grub or worm pattern wriggly tail that swims enticingly on the drop. Over the past few months, the Powerbait version has been a real standout. Eight colours make up the range and to date we’ve nailed jewies on more than half of them. Cappucino is a reliable all-rounder suitable for a range of conditions. Smelt and Bleak are good options when the water is clear, whilst Breen Chartreuse goes really well in cloudy / green or semi discoloured waters. After a period of flooding rain when the water really dirties up, I’m certain the bold Fire Tiger pattern will also get the job done. Interestingly, most mulloway react to a plastic within the initial stages of the retrieve, either as the lure descends immediately after casting or within the first few hops up off the bottom. Almost always, the lure is intercepted on the drop – as it falls through the water column. Hits are generally quite distinctive and can be recognised by a solid tick or bump that transfers through the rod tip as the lure is inhaled. Therefore, it is important to maintain a slight bow in the line as the plastic descends – both after casting and in between imparting action on the lure. Anytime the line flicks or twitches – strike firmly to set the hook. Maintaining contact with the jig-head also helps to maximise the lures’ hang time – keeping the plastic hovering in front of the fish for longer. 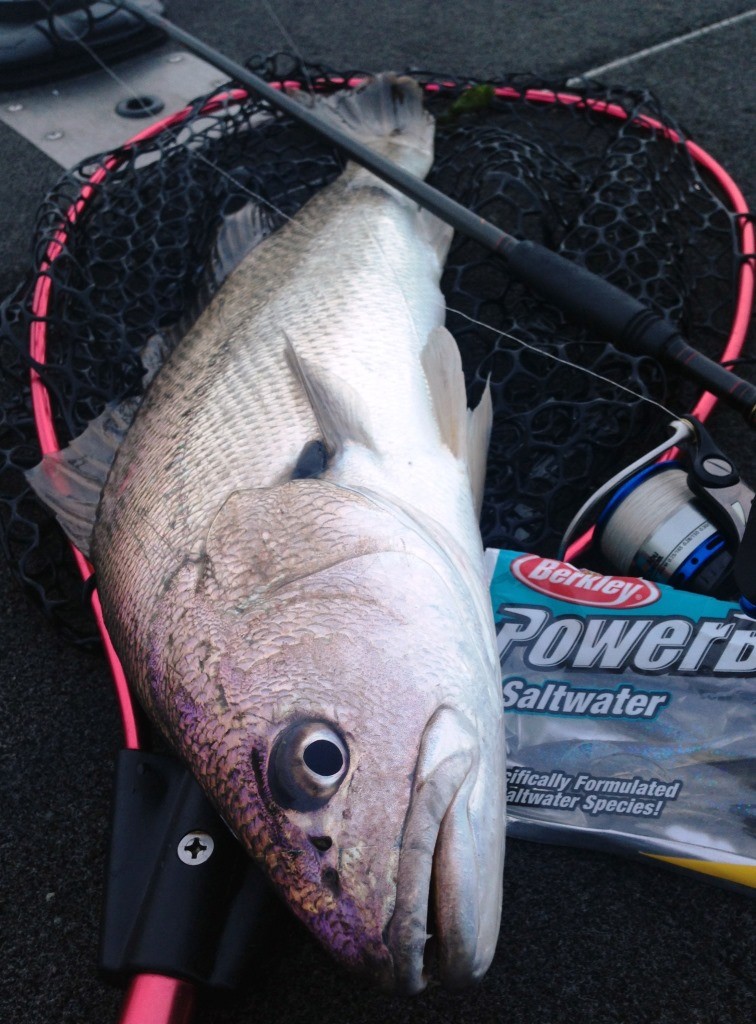 In addition to the seemingly sudden spike in natural recruitment as referred to earlier, Fisheries Victoria has implemented a marine stocking program (including mulloway) as part of the State Government’s Target One Million plan – which aims to increase participation in recreational fishing. More specifically, 5000 mulloway were recently released into Lake Tyres with further 2500 planned for release into Tamboon Inlet. Anglers from other coastal regions have also been invited to discuss future marine and estuary stocking opportunities. Whilst it will be a few years before these fish reach maturity, it is an exciting time for fishing in Victoria.