Colours are one of, if not the most talked about and fussed over things we do with lures. Why? Do the fish really care?

An angler walks into a tackle store and straight up to the lure wall. Flicking through the racks of lures he looks anxious and a little edgy. “How are you today” the store staff asks, “I’m good but I can’t find the colour lure I want anywhere”, “What colour is that?” the store person asks. “It’s 54”, the angler says. The store attendant scratches their head and then has an idea! “What if we get 53, it’s exactly the same colour, only with red eyes instead of silver and has a matt finish paint job – that’ll do it!” “No…” the anglers gruffly says. “It’s gotta be the same, it’s the only one that’s been working!”

So what’s happened here? Why is the angler so confidant in this lure colour and why won’t any other lure – almost the same – do the same job?

Confidence; confidence in a colour is almost everything to an angler. If colour wasn’t such a big deal to humans then we’d all be driving the same colour car and wearing the same coloured clothes. The colour of a lure is generally what first catches our attention as we walk along browsing the tackle store lure wall.

What do the fish want out of this deal? It seems we’re so hung up on the colour of lures, we forget some of the other ‘more important’ things about the lures we use. Don’t get me wrong, I’m not a colour hater, it’s just we put so much faith in it sometimes it’s crazy! I’m a devoted lure junky – have been forever! But for me, it’s about form and function first.

Getting the lure in front of the fish is the most important aspect of lure fishing. Without you doing this, you’ll catch nothing every time. So the function of the lure would seem to trump the colour stakes in this regard.

Then what about it’s size and shape? If a Barbie Doll had a bib mounted in the back of its head and a couple of trebles swinging from its plastic bumpy bits, would you toss it at a fish? For a joke probably! But in the real world, if you were serious about catching stuff, then hell no!

So you need your lures to resemble, or at least partly resemble a food item in the waterway you’re fishing.

So in other words, your lure needs a particular form. Is this form more important than the colour? Barbie Doll or bait fish profile? Bait fish profile please! Problem solved. 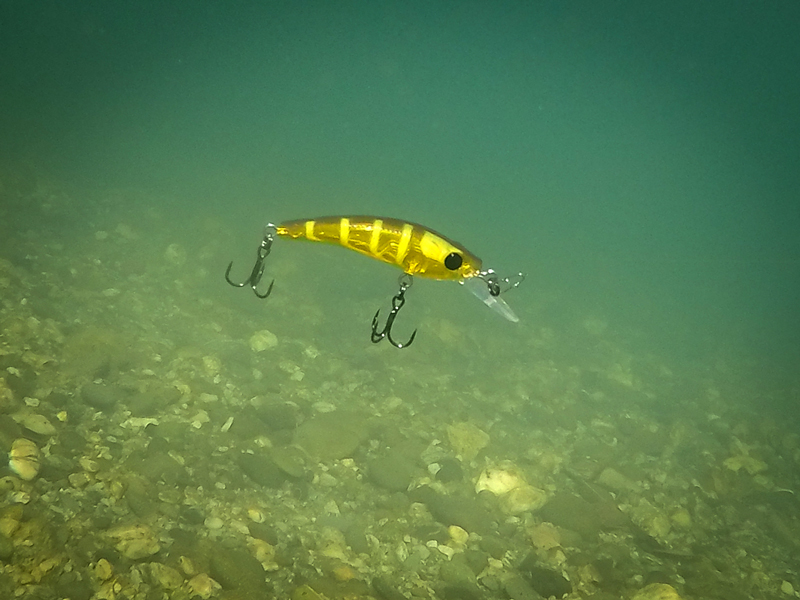 Lures can look completely different when view from the side in water. This is how most fish see your lure – not from above the water looking down. Fish eye view.

So we have just established that function and form are more important than colour…congratulations!

The simple fact being fish live in water, and water being a totally different substance to air, should tug a little at your science strings. Water is the great evil to almost every colour we see. Water doesn’t really like to play with dull colours; black, brown, purple and blue. The colours that are first to be distorted below the surface are red, orange, yellow and green. Not gone, just differing from what we see them as above the surface. Luckily though, the water depths most of us play in are too shallow for below surface colour transition to take full effect. Although, the subject of water clarity – now there’s a subject you can sink your teeth into!

The clarity of the water around your lure and what and the colour of your lure, can have a resounding effect on your catch rate. In super clear water, let’s say 5 metres of visibility, a keen-eyed predatory fish will be looking for any signs of movement that equals food. If however, your lure swims into this territory and it’s the right shape but totally the wrong colour, this fish might not even move out of the structure for a better look. The thing to remember here is, the fish can see your lure very well and even from a great distance has made the decision not to attack based on the fact that the lure isn’t what the fish was looking for. Fish won’t waste their energy for no return.

The thing about fish food, is it doesn’t swim around with a neon sign on its back saying ‘Come Eat Me!’ The predator in this clear water environment is looking for things that it can hardly see because of good camouflage on behalf of the bait. Bait wants to blend in, not be seen by hungry fish! 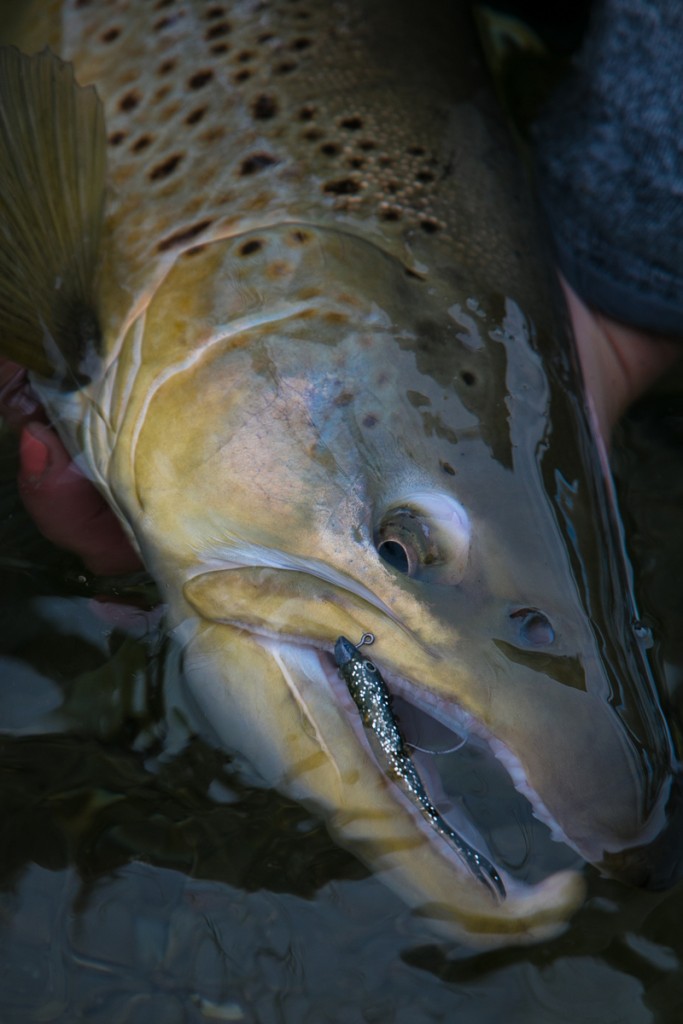 Big fish aren’t any smarter than small ones. They just don’t need to take as many risks. Fooling big fish is a matter of what you know not who you know.

So in this scenario, the best option is the most natural colour you have in your lure box, preferably with a slight hint of background colour. Clear body lures are also a good option, as are lures with chrome sides. One of the best camo’s in the world is a mirror. A mirror will reflect everything around it whether it be the water colour or structure. Where this type of camo fails slightly for the poor bait fish is when they have to move, picking up and reflecting sunlight, creating ‘glints’, and then it’s time to run (or swim!)

Give fish the credit they deserve. They are great at what they do for a job; eat stuff. And in order for all this eating to happen, the visual abilities of fish far out way our own.

Let’s a have a quick look at a discoloured water scenario. Fish in this environment have to make adjustments and decide which of their body’s functions must be prioritized at the top of their list. Smell and vibration take priority in this water type, but sight still plays a major part and therefore the colour of your lure is just as critical! 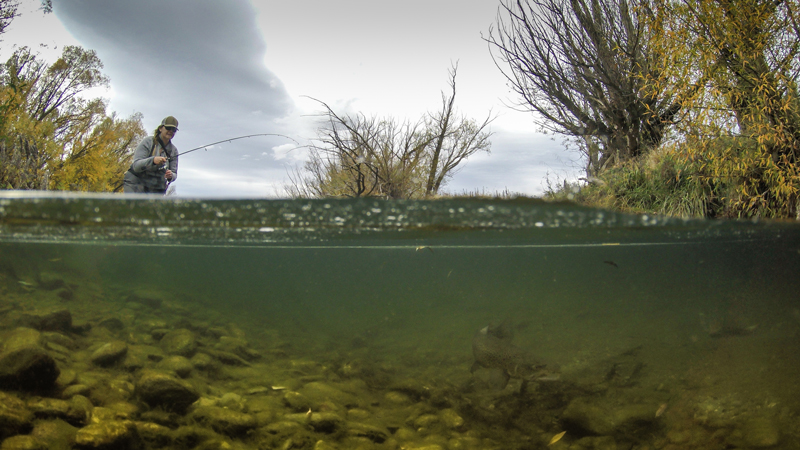 In this low light where everything looks the same, your lure selection is critical – rattles, no rattles, bright, natural?? Time on the water is what you need.

It stops being a matter of whether the fish can see your lure, but rather that you need to make the fish see your lure. In this case you’ll find two very different colour schemes will work.

The bright and aggressive colour will help punch through the sediment by reflecting bulk amounts of light from fluorescent paint. But the real winner here is something called ‘ultra violet light’. Fish see this wavelength of light far better than we do and use it to good affect – sometimes…

If the bright and loud isn’t getting you any attention, it could be having the opposite effect and shying the fish away. In this situation I call forward the ‘darks’. Dark colours (black, brown, purple etc.) are the silhouette makers. Discoloured water is very rarely black. It still has an element of light passing through it, making it light in colour. So by placing a lure that’s black in the mix, you immediately create a contrast.

It’s this contrast that makes your lure stand out, making it visible. Keeping in mind it still needs to travel quite close to the fish for it to be seen, but the fish will have its lateral line switched ‘on’ to high beam, so it will already know what’s coming!

Make no mistake, fish know what’s around them. If they don’t they get eaten!

Colours have their place in the system and we all need to feel confident that we have made the right choice. Having confidence is the most important thing about colour selection. You still need to get the lure in front of the fish.

In the big world of lure colours, the can be categorised into three distinct types; naturals, brights and darks.

If you have a selection of these with you at all times, then you’re ahead of the game already. It doesn’t really matter if your lure has a scale pattern or not. Or whether it has gold or yellow eyes. The fish really don’t care that much.  And when you look at a lure swimming in the water, you can’t see the difference anyway. If the fish could and they cared, I’m pretty sure those two or three trebles hanging off your lure would upset them first.

I’m still catching fish and I’m sure you are too.