A Week in Snapper heaven

A week in snapper heaven

Like to escape the daily-grind for a week and throw soft baits at snapper? The Berkley NZ crew traded the Auckland office for Great Barrier Island and found some hot action! Sam Wilkinson recaps the special week on the water.

When the call came through asking if I might be “interested” in heading away on a trip with the team from Berkley, and that the destination was to be Great Barrier Island for five days, my answer was, and was only ever going to be: YES!

Fast forward three weeks of intense planning, weather checking, re-planning and then re-weather checking, and the crew was finally assembled in the wee morning hours at Gulf Harbour Marina. Introductions were made as we loaded up the Berkley/PENN Surtees with as much “Gulp!” and camera gear as you could imagine. Off we set into the wider Hauraki gulf – a rather confused stretch of water on this particular day and with a weather forecast of up to 35kn throughout the week. In hindsight, Great Barrier Island is the only destination we could have pulled this trip off. 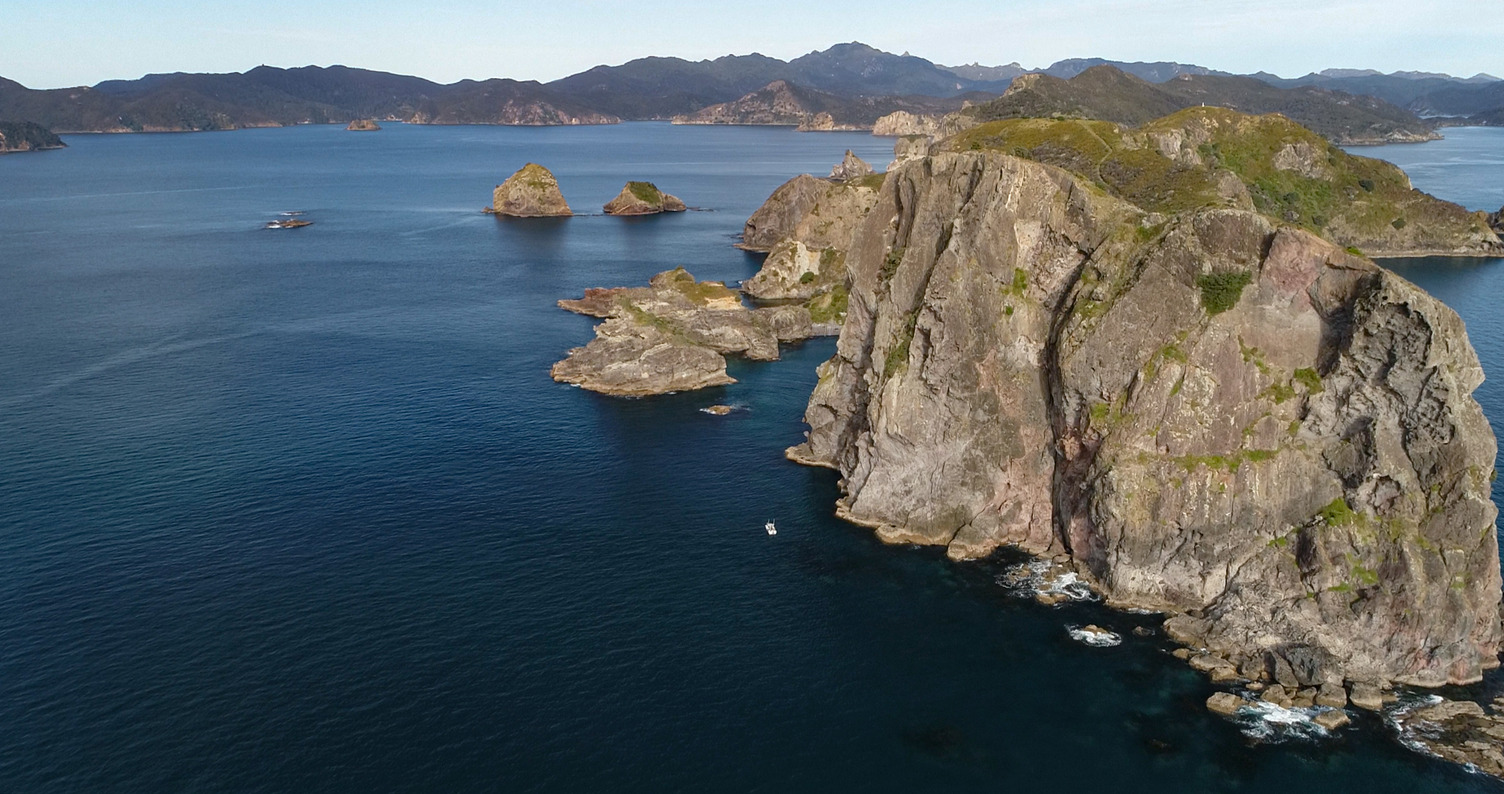 The towering cliffs and intricate bays of Great Barrier  meant it was possible to find shelter no matter the weather cycle.

The crew was an even split, three kiwis and three Aussies. Mark Phillips or “Captain” as he is more commonly known around the industry could be considered one of the founding fathers of soft baiting in New Zealand. I remember watching Captain in the DVDs and reading his articles in every magazine I could get my hands, learning about how this new technique was going to change the way we fish!  The rest of the crew was made up of Adam Royter, Cameraman (not to shabby on the rod either but most valuable for his Aussie sayings); Luke Reilly, social media genius (Dumpling connoisseur); Mark Stephenson, Pure Fishing New Zealand Manager (Camp mum too); Finn Henderson – Skipper/Boat Driver (Berkleys next top Model) and me, the humble sales rep.

Day one, although providing plenty of great sized eating fish under workups at the back of Kauwau Island, was largely spent making our way east towards Great Barrier Island and our destination for the next four days. 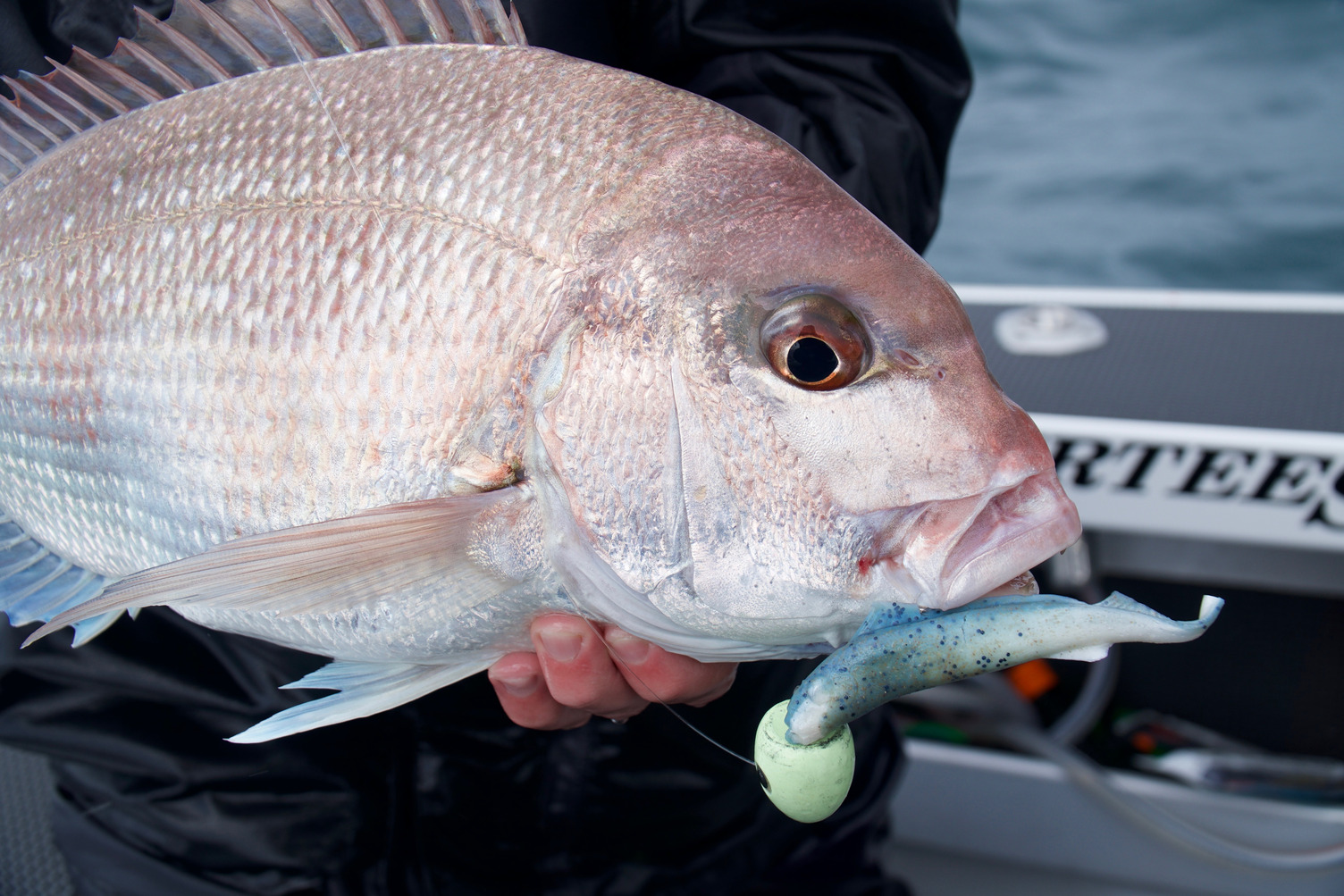 A taste of what was to come, workup red’s on the journey across sure whet the appetite.

By late afternoon we had pulled up at the jetty below Fitzroy House, organised tying off the boats and had carted our gear up to our accommodation (a walk that seemed just slightly too long to be leisurely no matter how many times we did it). The evening was spent trading stories, rigging gear, and discussing the likelihood of catching that dream fish we had all come here to find. 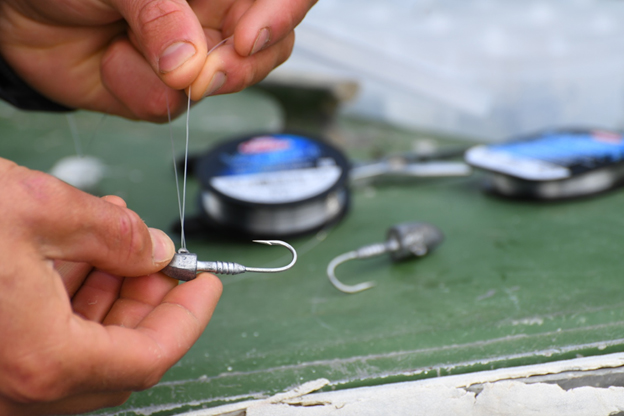 A snapper angler’s armoury: many knots were made between Vanish fluorocarbon leader and a Nitro Saltwater Pro jighead during the trip!

Day two started well before the sparrows had even thought about rolling over. Given that this was to be our worst weather day, showing gusts of wind well over 30knots, we planned to fish the shallow reefs and coastal areas on the western side of the island.  Not long after the first cast had been fired into a likely looking gut “Captain” was hooked up on what turned out to be the same model of snapper we would find at almost every place we stopped – a nice fat snapper of around 2-3kgs. We spent the greatest part of the morning and into the afternoon working our way around the coast with much the same result and, for the most part, managing to keep ourselves sheltered from the wind. After a quick break for lunch and to hide from a particularly nasty rain squall, we made the call to seek out some more exposed territory in search of something a fair bit bigger. 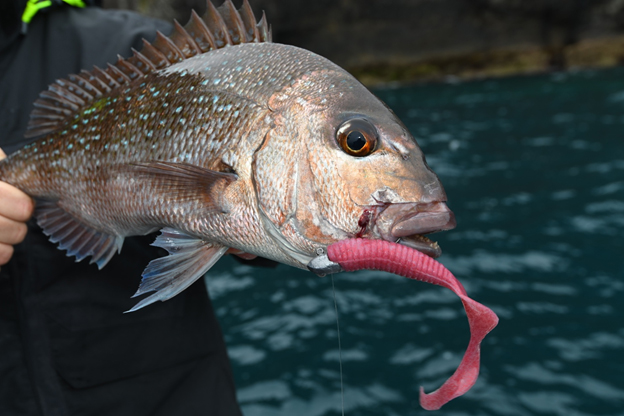 The bays of Great Barrier were full of beautiful school-sized snapper that climbed all over Gulp! Grubs.

The first exposed bay we prospected highlighted some of the challenges an angler faces when attempting to fight against the weather. Drifts overtaking casts and huge bellies of line were the result of the majority of attempts. Finn and I even experienced bellies heading in opposite directions (a result of wind bouncing of two different headlands I suspect). However, perseverance paid off and eventually, Captain was hooked onto something that resembled more of what we had been looking for. After a well-fought tussle, this fish managed to find I nice gutter and, in only six meters of water, the 15lb leader could not hold up. With spirits lifted we carried on around the coast. 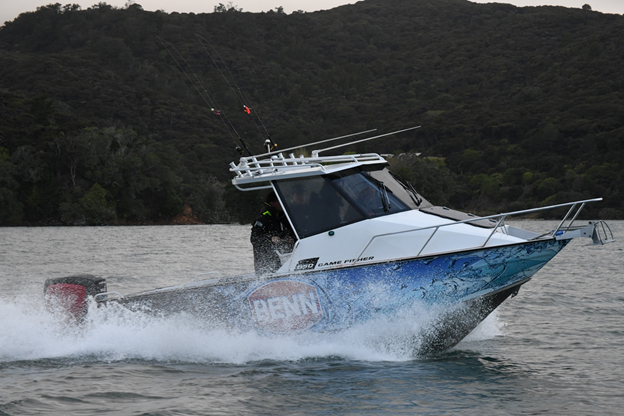 The Surtees’ windscreen wipers got a proper workout in the inclement conditions.

Captain hooked up once again only two bays further along with a cast I’ll never forget. It landed only inches from a wash rock with a steady stream of water rushing back into the ocean. Within moments the 6.5inch Gulp! Alive! Nemesis in Opening Night was engulfed and the line began stripping Captain’s PENN Slammer III. In a stroke of fortune, this fish began to run out into deeper water and with some excellent boat driving by Finn we managed to stay above it to avoid immediate bust off. The next few moments were a tug-o-war but eventually, a chunky snapper of around 4-5kg came into view and was swiftly guided into the landing net.

Elation was the only way to describe the mood of our entire crew. Wash fishing in this type of environment is very much a team effort and the amount of effort that went into this fish only added to the effect. On a day where we all got beaten up by the weather, there was no shortage of snoring heads that night. 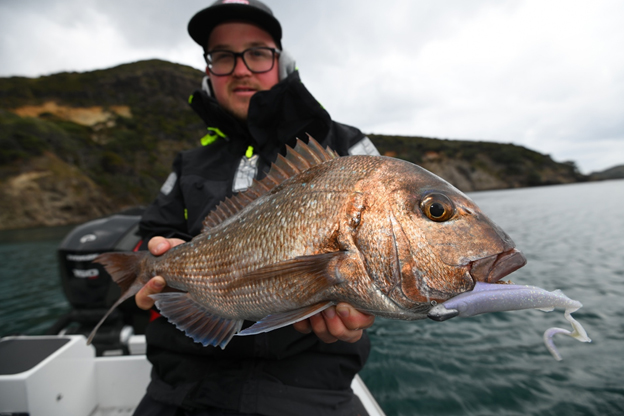 Opening Night proved to be a deadly colour for kelp-dwelling snapper. 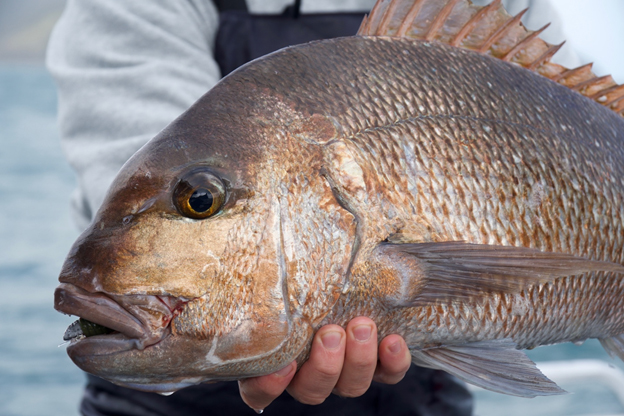 No messing about: fully engulfed Gulps! we’re a regular occurrence!

Day three greeted us with a torrential downpour that had been raging through the night. It’s fair to say, our start was significantly less enthusiastic than the day before. The wind had shifted slightly more north, so we made the call to head south with the wind behind us to explore a section of coast which had been too exposed the day before. On the way, a pod of dolphins led us out into the rough to discover one of the most intense workups any of us had ever seen. 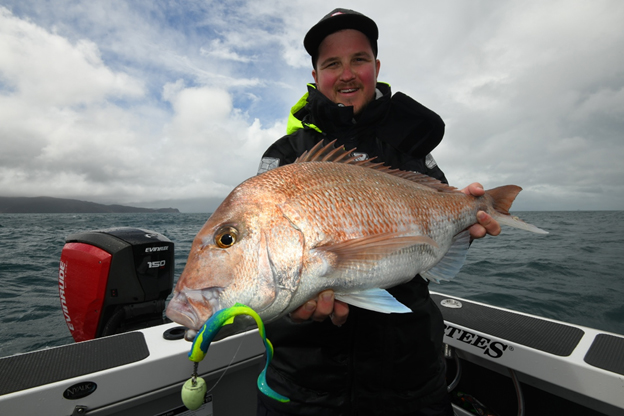 We were greeted with the works – dolphins, whales and hundreds of gannets raining from the sky… as well as a 1m side chop. The call was made “if you can’t catch a snapper now, you never will”  and what followed was 45 minutes of truly spectacular fishing where a 4kg snapper was the norm and the angler rarely had to wait more than a few seconds for a bite. But, as the saying goes “all good things come to an end” and so was true of our workup fishing. 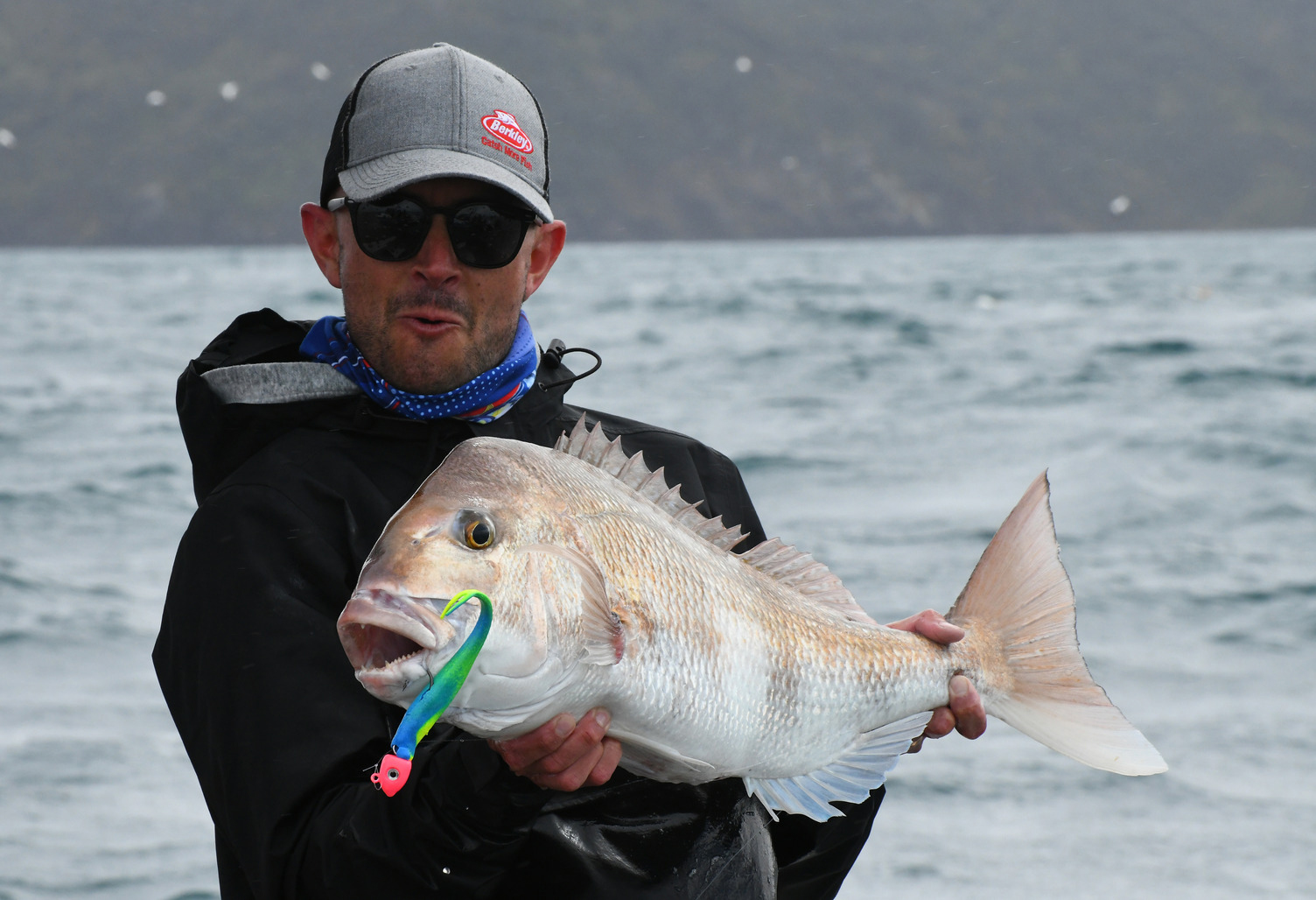 Stoke levels high, the workup action was as hot as it comes.

Continuing with plan “A”, we elected to selectively fish the more exposed areas which mimicked the ones where our larger fish had come from the day before. Finn managed another exhilarating bust off which, by the drag sound, would undoubtedly have been the fish of the trip. Unfortunately, this was not to be and all we got out of it was a robust curse word straight down the camera. Unlike the day before, this day proved to be one which provided yours truly the majority of opportunities at larger snapper. On my personal best for the trip, I’d elected to cast into a visible deeper opening among the bull kelp rather than directly into the wash. After a moment to let my 6″ Gulp! Nemesis in Nuclear Chicken sink the line quickly came tight the angle changed dramatically. Finn was once again on the hammer with the boat and we managed to minimize the risk of bust off by staying directly over the storming snapper.  A drawn-out tussle saw the dark brown Kelpie of around 6-7kg subdued and guided into the net with cheers and high fives all round – once again, an epic team effort. 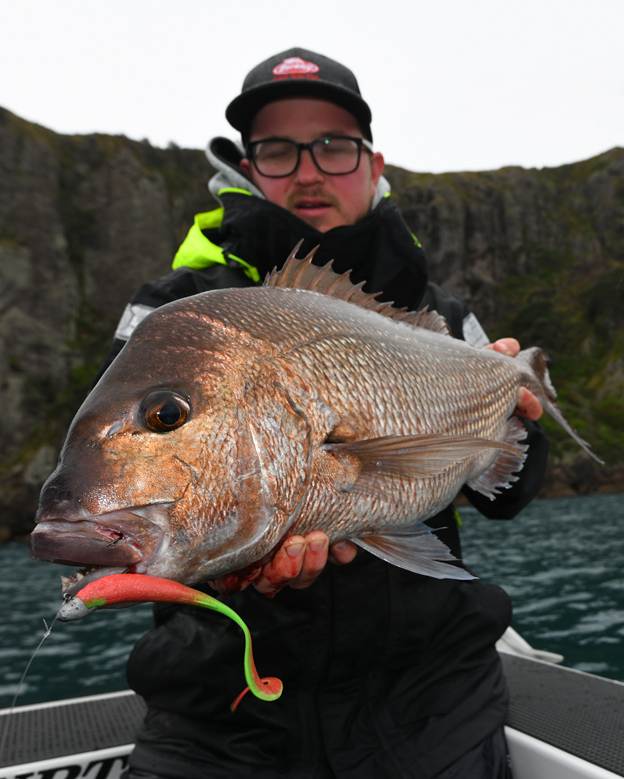 Fresh from the water, the kelp-dwelling snapper had an incredible depth of colour.

Day four and after three days of getting beaten around and a night where a few too many “fishing stories” were told we were up early once again. With the wind still blowing more than 20 knots, we elected to stay well within the confines of comfortably sheltered bays and were quite content to continue catching snapper to 3kgs. One of note was a snapper who took a liking to both mine and Captain’s soft baits at the same time! The result was a very confused crew watching two rods do the same nods all the way to the boat only to find one fine snapper with both baits in its mouth – talk about a review on the taste element of Gulp!

The remainder of day four was spent in true blokey happiness, huddled around a campfire at the famed Smokehouse Bay talking rubbish and cooking sausages. It was here where we were able to appreciate the true beauty of Great Barrier Island and the fishing opportunities that we are spoiled with here in New Zealand. In a week where the weather limited our approach, we were treated to spectacular snapper fishing almost everywhere we went. And although we didn’t manage the snapper that dreams are made of, all of us were astounded by the “good soize” and abundance of wildlife that Great Barrier has to offer. 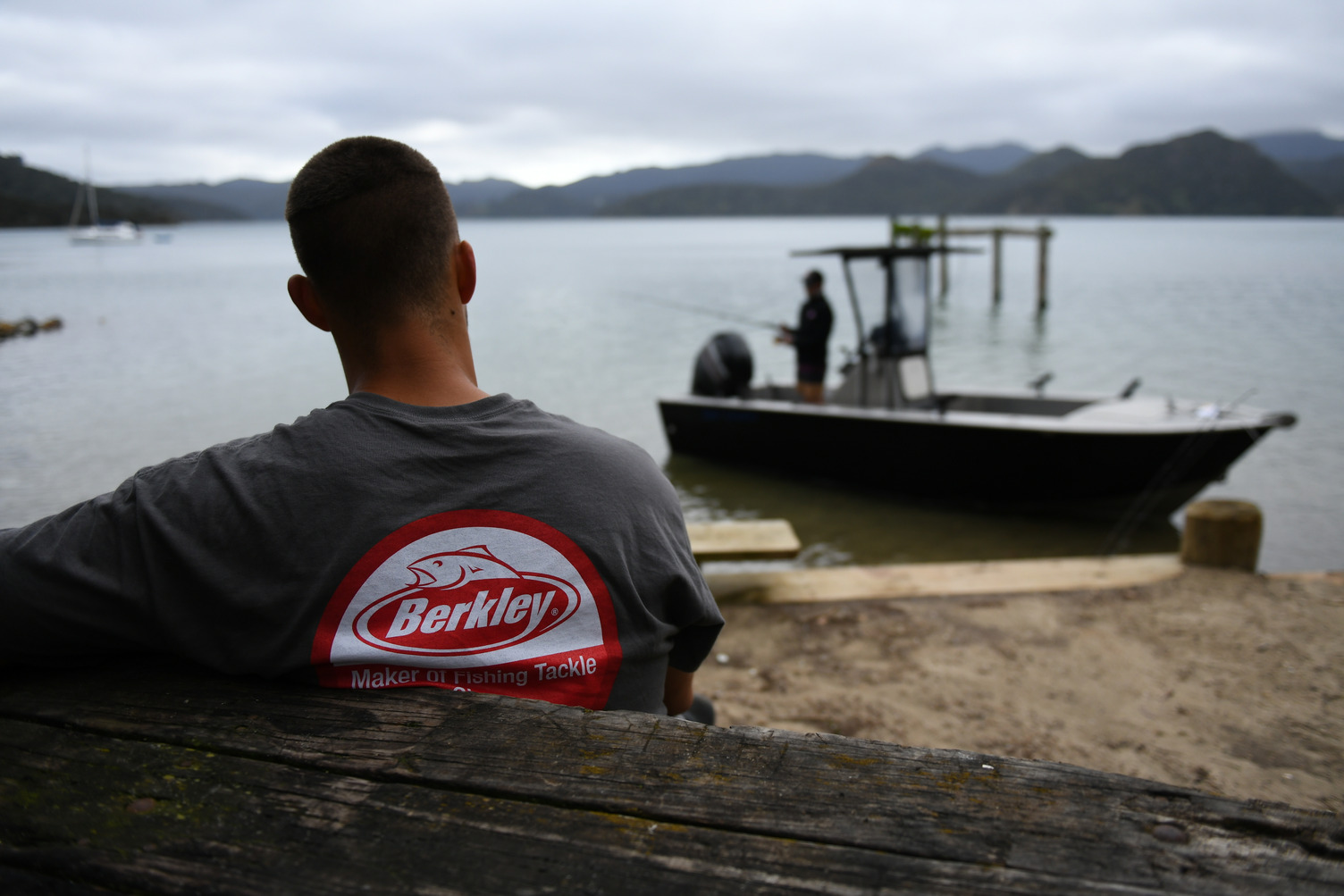 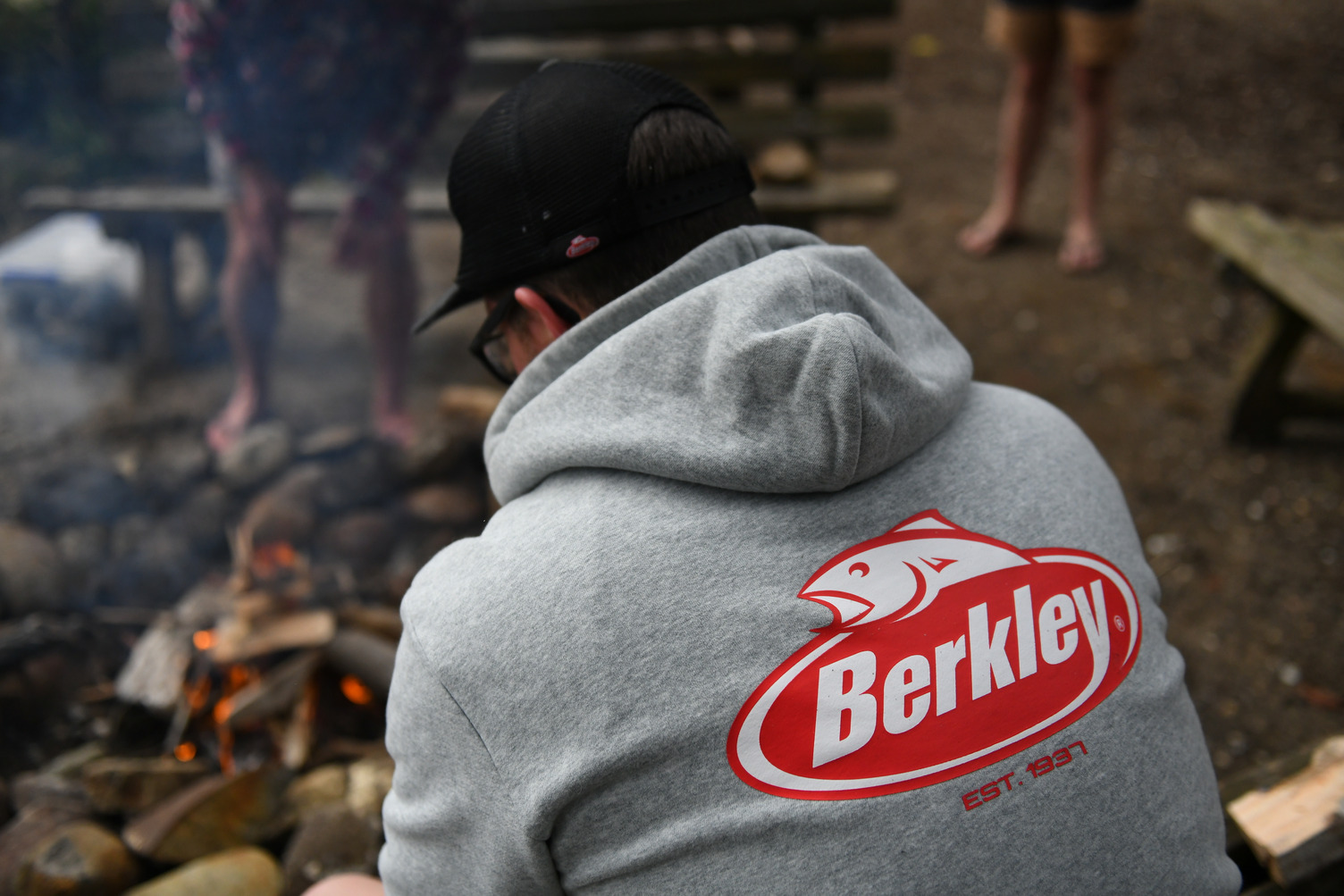 Tranquil Smokehouse Bay offered a great refuge to get out of the elements and reflect on the week’s action.

Day five… Well that’s a story to have over a beer, let’s just say the weather wasn’t kind for the return journey back to the mainland!

LEARN MORE ABOUT RED DOG
BACK TO STORIES 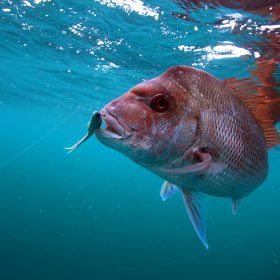 Gulp! The Importance of Scent

Angling legend Adam Royter talks about how important scent is when it comes to fish opening their mouth and eating your lure!

Q & A with JON PROCHNOW